Welcome to the Monthly Crypto Outlook! The fast-paced nature of crypto markets sometimes makes it easy to miss the forest for the trees. That’s why every month, I’m publishing my data-driven, long-term analysis of the crypto markets and give you actionable insights to manage your own portfolio.

Let’s take a quick look at traditional markets. The S&P 500 is in all-time-high territory again after its speedy recovery from October lows and with a performance of 12% in November, the index posted one of the best months in history. The key level to watch will be the weekly support/resistance flip at 3500. I’m hunting for entries in this area if the market decides to retest this level. 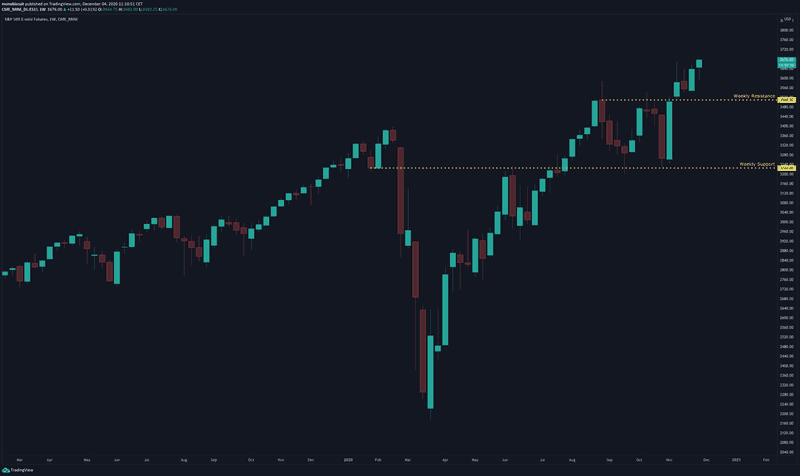 Positive developments regarding a covid vaccine has led to a shift in investor sentiment towards risk-on assets, which caused a significant underperformance of safe-haven assets such as gold and silver. Strong demand for crude oil clearly shows that investors are expecting a pick-up in economic activity and with a 30% monthly gain, oil has quite simply been the most lucrative “reopening trade” in traditional markets. 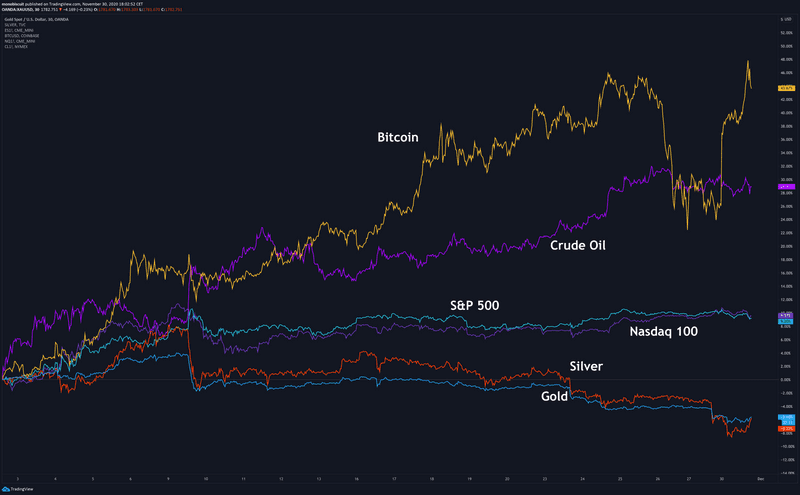 Looking at the correlation chart of Bitcoin, gold, VIX and the dollar index, what clearly stands out is the spike in correlations of all assets during the sell-of in March. A rather strong and persistent negative correlation can be seen between the fear gauge VIX and Bitcoin, substantiating the notion that Bitcoin does not yet serve as a hedge against equity market risk. The negative correlation to the Dollar Index (DXY) gives rise to the argument that Bitcoin might be the asset of choice if the dollar weakness was to continue. In regards to the Bitcoin-as-digital-gold narrative, we have seen elevated levels of correlation between Bitcoin and gold in the past few months, but with Bitcoin’s parabolic rise in November, this trend seems to slow down.

Let’s dig deeper into Bitcoin, which looks set to end the year stronger than ever.

Let’s first examine where we are in the market cycle and whether the long-term investment case still holds.

In the four years following the first halving, Bitcoin has gained roughly 5100%. Its performance after the second halving has been significantly below the first one but with a gain of 1400% no less spectacular. If these gains were to occur again, we’re looking at possible trajectories as depicted by the two grey lines below.

The growth range defined by the previous two halvings puts the price targets for 2024 anywhere between 150k and 500k. Take these estimates - generally, any price target - with a grain of salt. A nascent asset class like bitcoin should be regarded more as a tech startup: subject to various risks and eventualities but with high upside potential. Various factors such as the general maturing of Bitcoin as an asset class and the institutionalization of the digital asset space might lead to less growth in the future as the market capitalization expands.

Let’s now assume that the third halving cycle will be lower by the same magnitude as the second one, which only reached 27% of the first one. Extrapolating this to the third halving cycle, it could be argued that returns could amount to ~375% this cycle, which puts Bitcoin at a much more conservative price tag of 46k in 2024.

Remember, this is not an exact science and should not be looked at in isolation. There is no guarantee that the price action after past halvings will repeat in a similar fashion. However, there is substantial evidence that Bitcoin’s price reacts to these fundamental cycles.

Will this be like the bull run in 2017? No one knows for sure, but it sure looks like we’re in the early stages of a massive upward surge again. 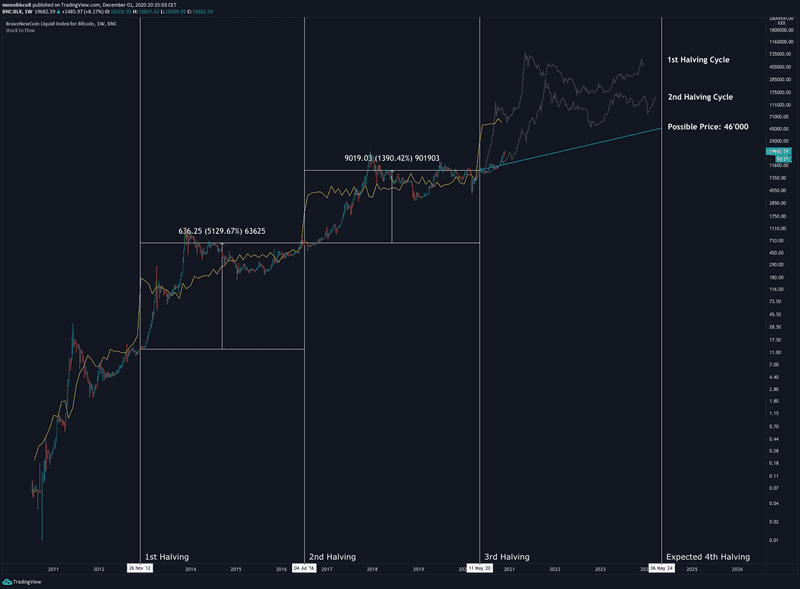 The widely acclaimed stock-to-flow model (S2F) essentially models the price of Bitcoin as a function of its stock-to-flow ratio and compares it to that of other assets such as gold or silver. The stock-to-flow ratio shows the number of years required at the current production rate (6.25 Bitcoins per block or about 328’500 per year) to achieve the current stock (all the Bitcoins in circulation). The yellow line in the above chart represents the S2F model’s estimated Bitcoin price, which is expected to reach 100k by 2024 (more on the S2F model here). Notice that in each of the previous two halvings, it took between 4 to 13 months until we reached the estimated price for the first time.

Price action since the third halving closely follows the second one. It remains to be seen whether S2F’s predicted value of 30k for the end of 2020 will be reached on time, but the overall trajectory seems to closely mirror previous halving cycles.

There’s not much to analyze in terms of price levels anymore. Besides the all-time-high, every resistance level has been taken out and we’re currently in uncharted territory (pun intended). Price smashed through the last resistance level at 16.2k, retested it over the thanksgiving weekend and quickly resumed its upward trajectory to reach a new all-time high on a few exchanges. Although we still haven’t seen a proper close above all-time highs, it is worth noting that Bitcoin’s market cap has already surpassed its 2017 peak due to the larger circulating supply. As we progress beyond the all-time high, we need to drill-down to lower time frames to analyze market structure and time potential reversals.

On the weekly time frame, the bullish market structure is intact and from a long-term perspective, I’d only start to worry if we lose support at the 16.2k level. But even then, it could be argued that the market is still bullish as long as a higher low forms anywhere above the 14k level. Even a pull-back to the 11.5k level - although rather painful and in my opinion unlikely - would technically still be bullish. 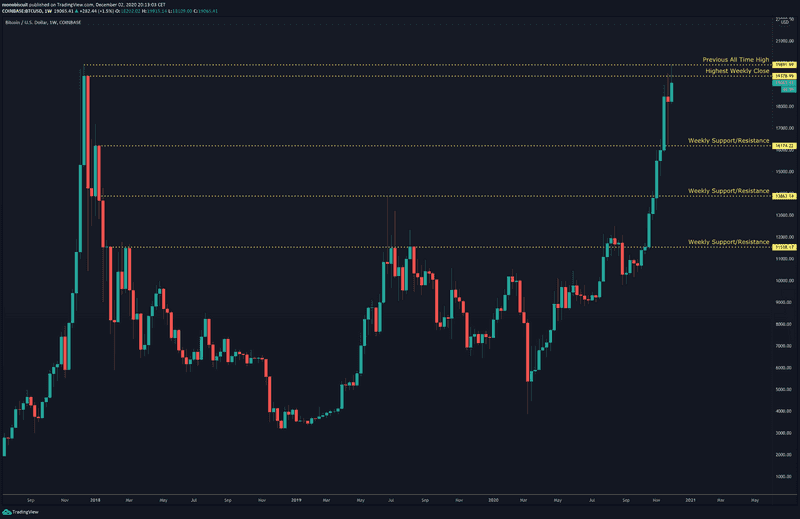 Supply on Exchanges on Decline

This bull run has largely been driven by a supply squeeze. Total BTC supply held by exchanges has been declining steadily since the beginning of this year, as can be seen by the blue line in the chart below. There simply is not enough Bitcoin being mined to satisfy new demand. New players such as PayPal and Square are already gobbling up 2-6 times the Bitcoin that is mined, while Grayscale is seeing inflows of similar magnitudes.

Grayscale Bitcoin Trust (GBTC), the largest publicly traded Bitcoin fund, has seen massive inflows the past few months. According to its Q3 report, 84% of the inflows came from institutional investors, which purchased on average $55 mln per week. It currently has around $10.3 bn in assets under management (roughly 2.5% of BTC supply), and is up 59% from the $6.5 bn at the beginning of November. We estimate net new money in November to be around $1 bn, double the increase from the estimated inflow of $500 mln in October.

The premium currently stands at 30% and reflects the excess amount that market participants are willing to pay to get exposure to Bitcoin via a publicly traded vehicle. In the past, the premium or discount could be used as an indication of market sentiment and has in some instances predicted local market tops (see the red circles in the chart below). However, absolute premium levels will likely decrease over time, as more custody providers cater to institutional investors and their regulatory needs, which thus lessens the necessity to invest via a publicly traded instrument. This trend is already reflected in the much lower premia this year compared to much of 2017 and 2018. Due to the high false positives of this indicator (such as the high premium in the March sell-off this year as well as the elevated premium during the entire 2017 bull-run), it should solely be regarded as a general gauge of market sentiment. 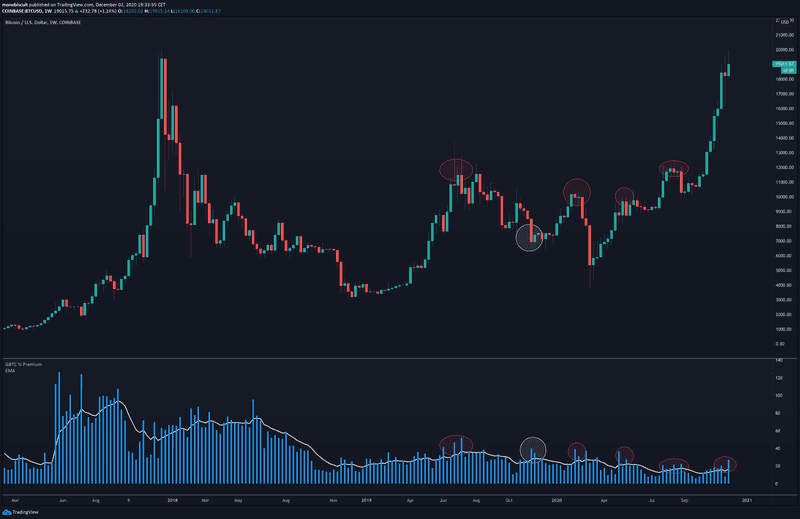 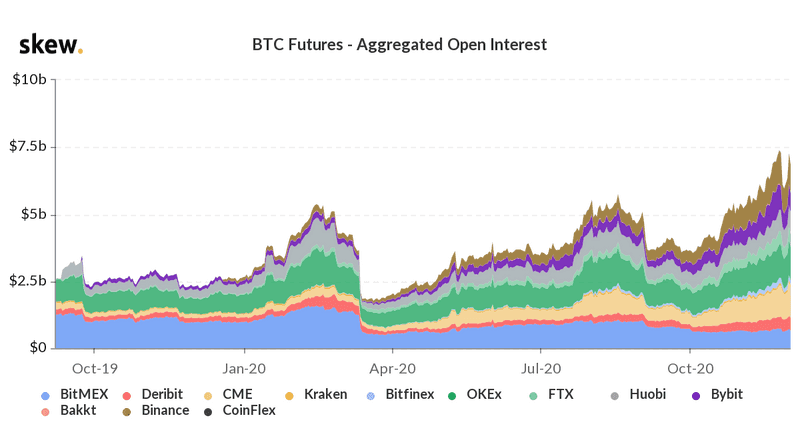 Funding rates have become severely stretched around all-time highs and a huge amount of leveraged longs have been liquidated during the thanksgiving sell-off. 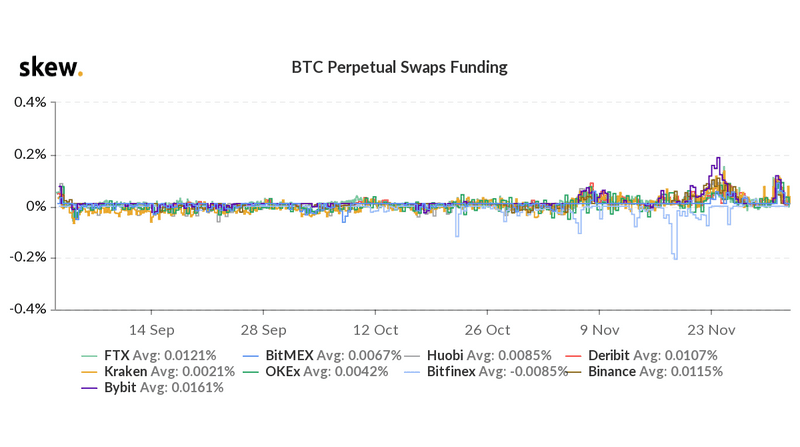 One of the most important on-chain metrics I’m looking at regularly is the Hash Ribbon indicator (more info here). The Bitcoin’s Hash Rate can be used to identify market bottoms which indicate great periods to buy. The fact that this signal just fired in the area of an all-time high says a lot about the health of the current market environment (see the blue dots in the chart below).

The Dynamic Range NVT Signal, Bitcoins “P/E Ratio” signaled a quick period of overvaluation at the end of November (more info about the methodology of this indicator here). However, the overvalued or undervalued state can last for long periods of time. So far, this is the only long-term indicator flashing a warning sign, so it’s worth keeping an eye on it and see whether we get more confirmation from other fundamental metrics as this bull market progresses. 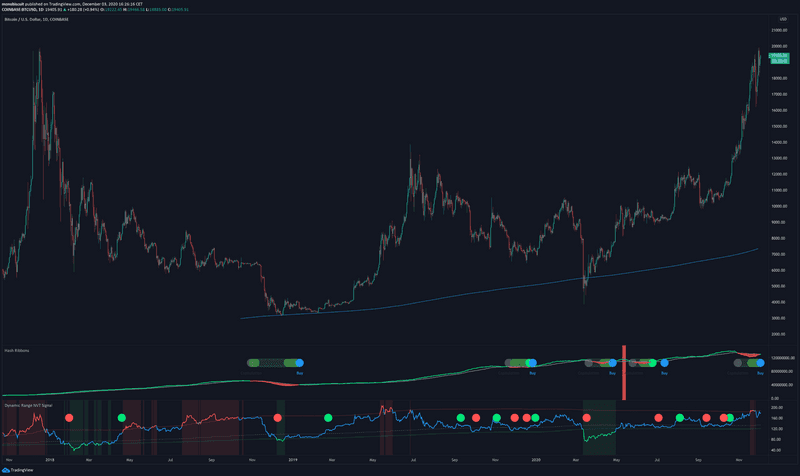 Another metric that is useful in identifying time periods with stretched valuations is the MVRV Z-score. “MV” stands for market value and is just that: the current market value of Bitcoin. The “RV” or Realized Value, calculates the market cap by using the price at the time each coin was moved the last time (e.g. sending from one wallet to another). Taking the average of all these prices and multiplying by the coins in circulation, we get a less volatile reading of the fundamental value of Bitcoin (more here). In the below chart, we can see that all prior tops have coincided with large deviations from the realized value. 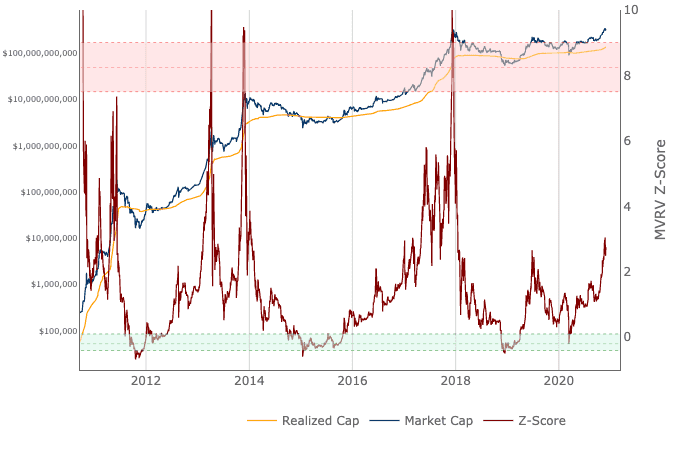 Overall, Bitcoin looks incredibly bullish going into the end of 2020 and I expect the bull market to continue well into 2021. A break through the 20k level could result in fireworks with $1000 candles caused by a short squeeze. That being said, I will be looking for opportunities to hedge some of my spot holdings should signs of a blow-off top appear. The question is: How do we identify a blow-off top? Glad you asked. Stay tuned for my upcoming article on the strategies that I use to capture the highest returns of this bull run.